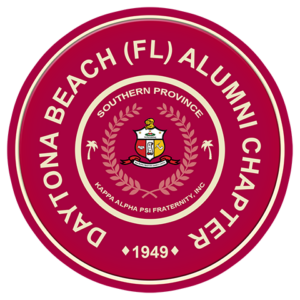 The Daytona Beach (FL) Alumni (DBAC) of Kappa Alpha Psi was chartered on February 18, 1949, some 37 years after the original inception of the fraternity so nice, they had to name it twice.

Five determined men embarked on the journey to bring an alumni chapter to the City of Daytona Beach, Florida, home of Bethune-Cookman University and “Home of the World’s Most Famous Beach.” Those pioneers, four of which were physicians include: Dr. John Slack, Dr. Neal O. Crosslin, Dr. Norwood Biggins, Dr. Stilmon Meeks, and David Lever.

From humble beginnings in the midst of Jim Crow Florida to the present, in a city where Jackie Robinson broke the Baseball color barrier and Black people scarcely visited Beach-side unless working – to a city which heralded its first City Commissioner, its first Black Female mayor, and its first Black Male Mayor and even a Florida State Representative. The DBAC has seen it all come to pass.

From Health initiatives, voter registration drives, and its Guide Right programs, to its Annual Black & White Ball / Scholarship Banquet, to community service and philanthropic gestures in the city of its inception, and with a membership consisting of continuous trailblazers.

Under leadership of new Polemarch – Kofi Jack and his administration of high achievers, The DBAC will serve as a hub for networking, community involvement, and the spirit of achievement Kappa Alpha Psi is known for since 1911.