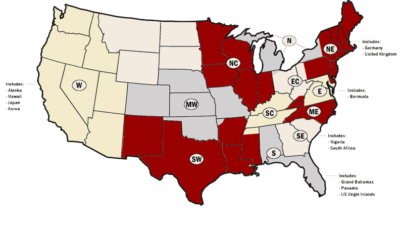 The Southern Province of Kappa Alpha Psi was created by the last grand Chapter at which the late Illustrious J. Ernest Wilkins, Sr., presided.  As a result of extensive study, the Grand Board of Directors, meeting in Kansas City, MO, in 1950, recommended that the Southeastern Province, then the most extensive province in Kappadom, comprising, as it did, the states of South Carolina, Georgia, Alabama, and Florida, be partitioned.  At the same session of the Grand Chapter in Kansas City, a proposal to partition the Southwestern Province was defeated.  After much debate and comparison of the record, a compromise was made whereby the Southwestern Province remained intact, comprising the states of Texas, Arkansas, Louisiana, and Mississippi.

The newly Grand Polemarch, Frank M. Summers proceeded immediately to effect the re-organization of the states, following the directive of the Grand Chapter.  Upon the recommendation of Province Polemarch W. Dickerson Donnelly, the Grand Polemarch asked the Keeper of Records and Exchequer of the Southeastern Province, Toussaint L. Hale, to assume the office of Provincial Polemarch of the newly created Southern Province.  Hale of the Birmingham Alumni Chapter accepted the appointment and proceeded to formulate a joint meeting of the two provinces to be held in the city of Jacksonville, Florida, October 18-21, 1951, as the guest of the Jacksonville Alumni Chapter.

Prior to the October 1951 meeting in Jacksonville, there had been very little fraternity activity in the Southeastern Province.  At the time W. Dickerson Donnelly was appointed Province Polemarch, no council meetings had been held since before World War II.  The Tallahassee Alumni and Alpha Xi chapters hosted the post-World War II revival of the Province with a meeting the weekend of November 15, 1946.  Polemarch Donnelly presided, and Grand Polemarch Augustus G. Parker (1945-47) was the principal speaker.  Thereafter, the Southeastern Province met in Birmingham in 1947; in Columbia, SC, in 1948; in Atlanta, hosted by the Alumni and Pi chapters, in 1948; and in Spartanburg, SC, in 1950.  During these years, Toussaint Hale of Birmingham was continuously elected Keeper of Records.  with the revision of the Constitution in Spartanburg, the duties of the Keeper of Exchequer were combined with those of the Keeper of Records.

The states of South Carolina and Georgia kept the original name and became known as the Southeastern Province.  The states of Alabama and Florida were designated as the Gulf Province.  However, before the first meeting of the new province occurred in October, the name was changed to Southern.  Everharding Pruitt suggests that the change was made to conform with the compass directions as used in naming the other provinces in the fraternity.

The official action of renaming the Province was taken two months later at the 41st Grand Chapter in Indianapolis, December 26-29, 1951.

W. Dickerson Donnelly, Polemarch of the Southeastern Province, and Toussaint Hale, appointed Polemarch of the Gulf Province at the close of the 40th Grand Chapter, presided jointly at the first annual meeting.

The first annual meeting of the two provinces was to be a joint meeting, which would make it relatively simple to divide the assets of the old organization and elect separate officers to function for the Southern and Southeastern provinces respectively.